© All material on this website is copyright Armond Boudreaux and armondboudreaux.com (2019). Unauthorized use and/or duplication of this material without express and written permission from this site’s author and/or owner is strictly prohibited. Excerpts and links may be used, provided that full and clear credit is given to Armond Boudreaux and armondboudreaux.com with appropriate and specific direction to the original content. 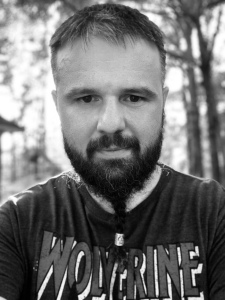 I’m a writer and professor living in Georgia. I write scifi thrillers, but I also write on philosophy and pop culture. You can find some of that stuff in the Philosophy and Pop Culture Series from Wiley Blackwell (here, here, and here). I also have a book (with my friend Corey Latta) on superheroes and political philosophy (which you can find here). And you can find my Very Short Stories on Twitter (@armondboudreaux).

I write for people who want exciting stories. My characters rarely get to sit still, and they’re rarely safe from danger. I put them into extreme circumstances because I want to see what they really believe and really care about once the compromises, uncertainties, and hypocrisies of ordinary life are cleared away.

I write for people who want complex characters with complicated motivations—characters who are like real people, in other words. There are good people in my novels, and there are bad people. But the good people fail sometimes, and the bad people aren’t simply bad.

I write for people who want compelling stories that are informed by ideas. I try never to preach my own views, though. Instead, I take an idea—like mandatory artificial wombs in Forbidden Minds—and let characters with different worldviews work out the consequences and implications for themselves. Too many politically-focused writers think that it’s their job to advance a worldview. I prefer to let readers decide for themselves. Instead of saying, “Here’s what you should think about this thing,” I’m saying, “Here’s a thing. Think about it.” At least, that’s the goal that I always set for myself.

But yeah—at the end of the day, I just love the thrill of a good story. I hope that you find Forbidden Minds as thrilling as I do.